My evolution of thought…

It all started with a humbling realization a number of years ago.  My current vehicle, a 92 Toyota pickup 4×4, does great offroad in most situations.  As far as what I have invested in the truck, I would say it’s minimal.  Aggressive mud terrain tires with steel rims, a rear locker, slight mods to suspension for lift and travel, beefed up tow points front and rear which includes an ARB bull bar up front and some high power lighting.  For the most part that’s it.  And it does great, I can’t complain.  But of course it has it’s down sides.  Long wheel base, independent front suspension poor departure angle and limits to what can be improved upon to make it more trail worthy without doing some serious modifications like a solid front axle swap.  Because it’s my daily driver I hesitate to take it out of service for any length of time to do anything serious as far as modifications go. 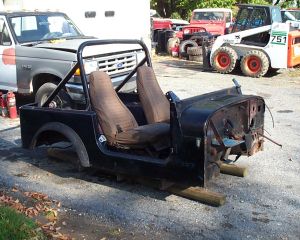 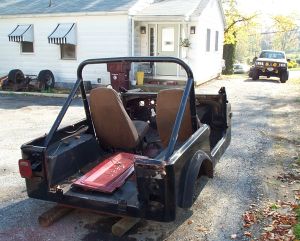 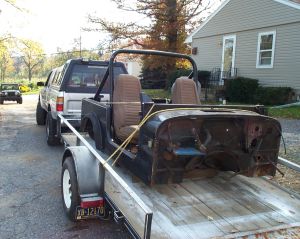 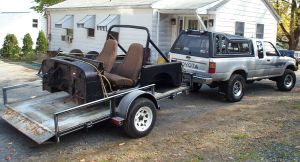 When I realized that the truck wasn’t the path I wanted to pursue for the project weekend warrior I started looking for another ideal vehicle.  Having been parcel to Toyotas my first thought was to find an early Toyota Pickup with solid axles and use that as a base for a serious build up.  After some research I decided not to go that route and started looking at Toyota FJ-40’s.  After finding a few and looking at my options for a buildup I decided the FJ-40, although it would have been a great base for a buildup, was just too expensive for the budget.  Then it happened.  I took a trip to New York to the Rock Krawl 2000 with a large group of Jeeps and I got the bug.  With so many options, possibilities, aftermarket products and information surrounding the Jeep it wasn’t hard to decide that the project 4×4 was going to be a Jeep.

So the research began.  Questions… what year and model? What drive train, what engine?  What kind of mods?  I finally decided on building or rebuilding an early CJ-7 for a few reasons like the longer wheelbase than the CJ-5, more relaxed emissions laws for the earlier vehicles and just the plain fact that the CJ’s had the classic look that I liked.  After doing some scouting around and looking at several potential buys for a base I got lucky.  A contact I made through searching for a Jeep told me about someone who, as a hobby, rebuilt Jeeps and Ford trucks.  So Carl and I visited Bob one afternoon and well, one thing led to another and now with the help of Bob the project begins.  So far to date most of the parts and components for the project CJ-7 have come from Bob or through a contact of his.  It also doesn’t hurt that Bob works for a machine shop and had been in racing for some 25 years and today to some degree offers his services to friends who race.  Through Bob a few immediate acquisitions were made including an AMC 360 crate engine with less than 13,000 miles on it which included all the extras like power steering pump, alternator, and AC compressor (to be converted into an onboard air compressor).  Also acquired was a Holley Projection Fuel Injection system, a T-18A manual transmission, a Dana 20 Transfer case, a CJ-7 tub that was an abandoned project and had much work done to it already, a straight, clean CJ-7 frame and a set of Scout II Dana 44 axles.  Jeepfan Mike had donated a Dana 20 for a few shifter parts needed.

As of Mid October of 2000 this project had begun with work to the tub and I plan to document this frame up rebuild / build up.  As the project proceeded the follow categories will be created and expanded on.  Those that are links are current or past parts of this project with written documentation. 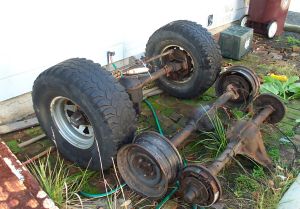 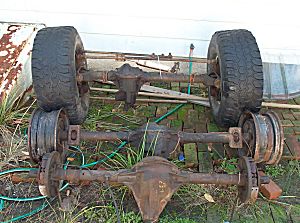 Here’s the Tub the day I picked it up.  The tub was an abandoned project from someone else who could apparently weld. I’m finishing up the job which entailed buying a mig welder and learning to use it. In many cases it’s not always a good idea to buy someone else’s project because you don’t know what you’ll find.   The tub wasn’t one of those cases for me as far as I was concerned.  Much of the bad steel had been replaced and for $150 which included seats, roll bar, heater and tailgate, I didn’t think twice about it.  Turned out to be a good investment with much of the rusted out areas repaired already requiring the job to be completed.