This page is a Differential Gear Ratio Chart for comparing tire size to axle gear ratio and the combined effect on power and fuel economy. 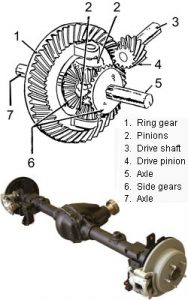 The following chart of Tire sizes and axle gear ratios are meant to give a general idea of the relationship between the differential gear ratio and the tire size and what effect the ratio has on power output and fuel economy. The chart is based on RPM levels at 65 mph (105 kph) and a drive train running at a 1:1 gearing ratio, meaning the transmission and transfer case are passing power straight through at a one to one ratio without reducing or overdriving the engines rotations per minute before it reaches the differential. It is also worth noting that a manual transmission will be the most efficient at transferring power through to the axles and that an automatic transmission will have some inherent slippage without a locking torque converter. Also with an overdrive transmission, your engine RPM will be approximately 20 to 30% less than shown here depending on the overdrive ratio.