Exploding Clutch – Why you should not coast down-hill with a disengaged clutch!

Greetings: I wanted to share with you an experience of mine with an off-road vehicle recently. I have not heard of this happening before, nor was I aware of this potential situation. But this is worth being aware of, I believe. I was wheeling my 84 CJ-7 a few weeks ago. I had just descended a rather steep downgrade and was in second gear, low range. The terrain flattened out to a wide sandy wash, with just a very slight downgrade. I pushed in my clutch (but left the transmission in gear) and let the vehicle gradually accelerate down the wash. This not something I normally do, but I knew that at the end of this wash, (which was about 1/4 mile long), that I would have to climb a steep upgrade and would have to shift back in second gear away. When I originally pushed in the clutch the vehicle was traveling around 2 mph. As I kept the clutch in, the vehicle speed gradually increased till about a minute later, towards the end of the wash, the vehicle speed was approx. 20 mph. Just as I was getting ready to apply the brakes to slow the vehicle down, I heard a loud explosion. 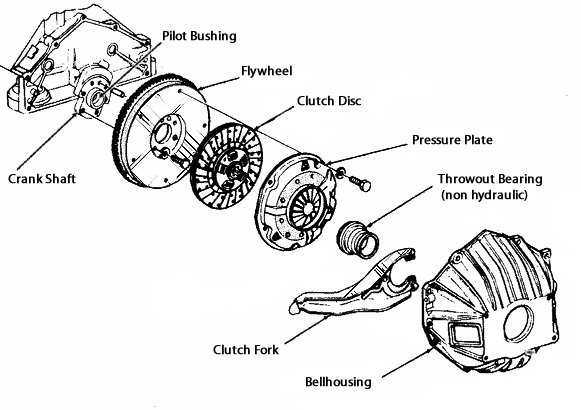 This was the sound of my clutch disc exploding. The clutch disc basically flew apart due to excessive RPM. The clutch was disengaged, (pedal on the floor) when this occurred. Engine RPM was at idle. (800 RPM) Because the clutch disc is splined to the input shaft of the transmission, it turns at the input shaft speed of the tranny. Because the transmission was in gear, the input shaft (and clutch) were being driven by the rear wheels of the vehicle, thru the rear drivetrain, in coast mode. My second gear tranny ratio is 2.37. My Dana 300 low range reduction is 4.0 (terra-low gears) My rear end reduction is 4.1 This gives my total gearing ratio at the time of approx. 39 to 1. At 20 mph, my 33″ tires are turning at approx. 211 RPM. (20/60×5280=1760 FPM) 100″ is static loaded circumference of 33″. (So 100/12=8.33 and 1760/8.33=211) So through the gear reduction, (in this case gear amplification because the tranny is being driven by the rear wheels, 211 x 39 = 8229 RPM. The clutch disc was spinning at over 8000 RPM when it exploded. Stock clutch discs are usually only rated to 6000 or 7000 RPM. Even racing clutch discs are usually only rated to 10,000 RPM.

The clutch disc is the widest part of the drivetrain where the most centrifugal force is developed. The vehicle exhibited little or no noise before the explosion. Even the whine of low range transfer case gears was noticeably absent. (I assume because the gears were not loaded) There was no way to tell that excessive speed was developing in the clutch disc, other that being aware of how the vehicle was being operated. Now the kicker. If the vehicle had still had stock gearing, this destruction of the clutch never would have happened. Stock gearing on this vehicle is 2.37 tranny, 2.61 transfer case, and 2.73 rear end for a total reduction of approx. 17 to 1. Clutch speed under this scenario would have been 211 x 17 = 3587 RPM, well within the range of normal clutch speed RPM.

When I discussed this situation with other mechanics and wheelers, they had never heard of this situation occurring. All thought I must have released the clutch before the explosion. (Clutches are also rated for the maximum RPM mismatch during engagement.) But the clutch pedal was fully down when this occurred.

The moral of this story is to be very careful when coasting a manual transmission vehicle with considerably lower than stock gearing in either the tranny, transfer case, rear end, or some combination thereof. Always shift to Neutral and coast with the clutch out. (engaged) Any manual transmission vehicle with gearing more than 1.5x to 2.0x lower than stock is a potential candidate. If you are not thinking about what you are doing, your vehicle could leave your stranded in the middle of nowhere.

As usual, the biggest variable is the driver. If anyone else has heard of this happening, (or has had it happen to them), I would appreciate hearing about it.

If you’re a Jeep JK owner you know the technique.  Sometimes when you open your door and you’re not getting out immediately, the foot goes down to hold the door out from coming back at […]

For too many, the phrase ‘diesel engine’ conjures images of belching black smoke pouring from a shaky, clattery old rig. Those who know their fuel know that image is completely out of date. In fact, […]

How to Install the Maximus-3 JK Modular Tire Carrier