Sometimes one tow strap is not long enough to reach from the recovery vehicle to the stuck vehicle and it’s necessary to combine multiple tow straps into one long length.  So how do you do that?  What you DON’T want to do is use a D-ring, which could become a deadly weapon if a strap were to break loose. Combining two loops by interlooping the ends of each strap into the other strap may seem like an easy idea until you have to separate them later after a hard pull.  Save yourself a headache later by using this tip. 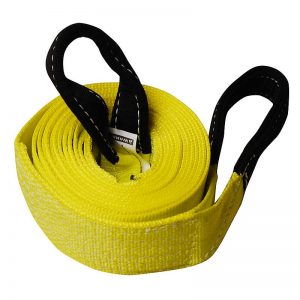 Throw an old magazine or 4×4 catalog in your 4×4.  The next time you need to connect two tow straps for that long pull, slide the magazine through the tow strap loops as shown in the photo.

After the hard pull yanking thousands of pounds of 4×4 out of a situation, the two tow straps will easily slip out of the other straps loop.

Consequently if you do not do this the tow straps can become so tightly bound together that you may not be able to separate them without risking damage to the straps and your two 30 foot straps will become one 60 foot strap. 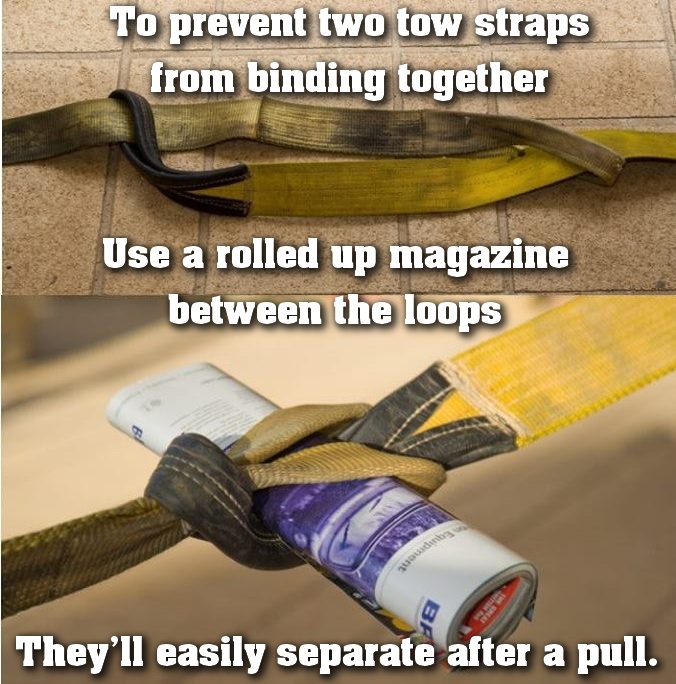 In addition to easy separation, the magazine is so light that if something breaks during the yanking, there’s less chance of damage or injury.

It should go without saying but NEVER use a D-ring to connect two straps.  The D-Ring will become a projectile that could result in serious injury, death or at the very least, vehicle damage if a strap or tow point breaks and one side of the combine straps goes flying.

DEPARTMENT OF: Cheap Tricks & Useful Tips …Exploding Clutch – Why you should not coast down-hill with a disengaged clutch!  Greetings: I wanted to share with you an experience of mine with an off-road vehicle recently. I […]

Whether you’re into Jeeps or not, you have to admit the Jeep brand has generated one heck of an aftermarket over the past few decades.  Almost any Jeep part or accessory imaginable has been (or will […]

If Jeeps, Jeeps and more Jeeps are your thing, you won’t want to miss this years All Breeds Jeep Show presented by PA Jeeps!  July 19th and 20th 2014 This year’s 19th annual event will be […]