Way back in the 1980’s when I just got my license, I was all into the offroad scene, especially the car crushing monster trucks that would make their rounds from fairground to fairground. One year, I remember seeing a monster truck that stood out from the rest named Virginia Beach Beast.  This truck was totally badass and meant business when it came to crushing cars, which was all the rage back in those rockin 80’s.  This Monster Truck Tank was a head turner.  Originally built and owned by William Townes of Norfolk, Virginia, the Virginia Beach Beast was a 1977 Chevy Blazer with a blown Chevy 454 cu.in. built on top of a 1942 M4 Tank Retriever Base from WWII.  I still remember the sound of the first ever Monster Truck with Tank tracks.  Over the roar of the blown 454 was the sound of old WWII tank tracks rattling and squeaking as it turned and churned across the fairgrounds.  To a fan of big trucks, this thing was the ultimate in Monster Truck.

Fast forward 28 year.  I’m browsing the forums and I come across a photo that gives me flashbacks of those old days at the fairgrounds.  It’s the Virginia Beach Beast but instead of it poised to crush a stack of cars or rip through the mud, its sitting under a pine tree, collecting needles and rusting away.  Oh, no.  Not the Beast.  What Happened?  Why was it left to rust away like that?  A part of me felt sad to see this unique prized icon of the 1980’s left to deteriorate.  Under the grimy dirt of years of neglect in faded paint reads “Virginia Beach Beast the Original Monster Tank.  Windows open, body falling apart, tank tracks rusting away. Not the way a one-of-a-kind should be treated.  It was just a single photo, no description, no details.  Who knows, it’ could have been sold for scrap or worse yet thrown in the car crusher as an ironic gesture.

But then I find out something more.  Something inspiring.  After doing a little digging, I learn that the Virginia Beach Beast was not left to rust away indefinitely.  Someone bought it and is working on bringing the beast back to life!  To crush cars again perhaps! 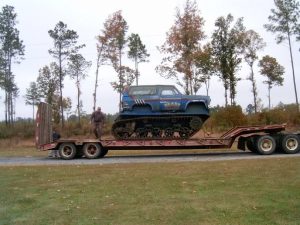 Turns out the Beast was purchased by Robbie Williams a few years ago.  According to Robbie, him and his brothers were fans of the VA Beach Beast as kids and had wondered what ever happened to the Beast.  Through a lead, they tracked down the vintage Monster Truck and ended up striking a deal with Willie Townes, the original owner of the Virginia Beach Beast.

As soon as Robbie got the Beast home, him and his brothers and friends got right to work on the truck, rebuilding, repairing and painting the tank chassis.  Once the chassis was repaired and painted, Robbie got to work on an engine.  He sourced a Chevy Big-Block 366 CID engine, had it bored .120 over, put in aluminum heads, a 740 lift cam, and used a cam pulled from a motor that was in a truck used for competition truck pulls.  For some serious spark Robbie used a Accel HEI distributor with a Accel HEI GM supercoil.   Behind the Big-Block Robbie installed a T-400 transmission that he had built up specifically for this truck.

Once he had a rolling chassis, they got to work on the body.  Robbie says they used about 70% of the original body with the remainder sourced from an LMC truck and various other K5 Blazers.

Finally with the chassis and body back together, the whole truck was off to the paint shop.

Robbie and his partners established Virginia Beach Beast Monster Truck Racing and continue to wow fans of the vintage monster truck to this day.

Follow Robbie Williams and the Virginia Beach Beast on Facebook for what’s currently happening with the Beast.   Photos and more information can be found at the following pages: