Prior to European settlement, the Sierra Nevada Mountains were home to several Native American groups, including the Nisenan (Southern Maidu), Washoe, and the Sierra Miwok. The Eldorado National Forest lies near the intersection of their spheres of influence.

The Rubicon Valley lies on the dividing line between the Maidu-Nisenan Tribe to the west and the Washoe Tribe of western Nevada. The Washoe occupied an area south of Lake Tahoe, ranging from the High Sierra to the Great Basin. The tribe followed an annual migration route fishing, hunting, and gathering nuts, berries, Fishand seeds in season, venturing almost as far west as Sacramento on occasion. Archaeological evidence indicates that the Washoe may have occupied most of the project area before giving way to later incursions by the Maidu-Nisenan. Both tribes visited the Rubicon Valley on a regular basis, using it as a meeting place for trading with each other and as a summer camp from which they could hunt and fish.

The Maidu-Nisenan Tribe considered Rubicon Springs its territory, which included the drainages of the American River from the Sierra Crest to the Sacramento River. The Maidu-Nisenan also occupied the American River drainage of the Sierra Foothills. This tribe lived below the 4,000-foot elevation in dome-shaped houses, usually located on ridges or larger flat areas near water. The Maidu-Nisenan territory was crossed with trails, allowing for easy access and trade with other areas and groups. Many of these historic trails are still used today.

On January 24, 1848, gold was discovered at Sutter’s Mill along the South Fork of the American River, Covered Wagonwhich significantly changed the culture of the area. Seemingly overnight, mass immigration occurred, and communities such as Coloma, Growlersburg (Georgetown), and Old Dry Diggins (Placerville) were born in the foothills. Some of these early trappers, explorers, and survey parties traveling the Georgetown-Lake Bigler Indian trail discovered Rubicon Springs in the 1850s, and the first log bridge was constructed over the Rubicon River in 1859.

In 1860, General William Phipps staked out a 160-acre homestead on Sugar Pine Point. He was one of the first known permanent residents of Lake Tahoe. While a logging camp at Sugar Pine Point explains the lack of sugar pines in the area, Phipps protected his homestead from the saw.

In 1861, John McKinney and John Wren, both Georgetown pioneers, established a hay ranch on the summit of Burton’s Pass (on the El Dorado – Placer County line.) In 1863, McKinney established McKinney’s Retreat, which consisted of a log cabin, tents, a sapling pier, and three fishing boats.

In 1867, John and George Hunsucker (miners from Kelsey, El Dorado County) felled pine trees and built a cabin south of Rubicon Springs, bordering the Rubicon River. Their cabin was at the foot of Rubicon’s frowning Granite Gorge. Within the next decade, the Hunsuckers added outlying shacks and a pine corral for their stock at Rubicon Springs. The area was renowned for excellent hunting. By 1869, McKinney’s Retreat comprised 160 acres (13 on Tahoe’s lakefront), catering to Nevada’s mining personnel and their families.

In 1880, the Hunsuckers began bottling spring water and selling it at Georgetown and Hunters’ Retreat. The spring water became so popular, the brothers had a difficult time meeting the demand. Health seekers were beginning to arrive at Rubicon Springs, and “Rubicon Water” was sold as a health-enhancing supplement.” The 1880s marked the beginning of the Rubicon region’s resort era.

In 1886, Mrs. Sierra Phillips Clark, locally known as “Vade,” purchased the Rubicon Springs from the Hunsuckers and added it to Potter’s Springs a mile away, founding the Rubicon Soda Springs Resort. She convinced El Dorado County to make the trail from Hunters’ Retreat (over Burton’s Pass) to Rubicon Springs into a one-way road. The new road let Vade build a 2.5-story hotel at the Springs, complete with curtained glass Rubicon Soda Springs Resortwindows, 16 small rooms, and a parlor with horsehair furniture and a foot-pedal organ. She used white linens and polished silverware to serve three meals a day. On busy weekends, visitors outnumbered the rooms available and slept in tents, cabins, or under the stars. Vade also put into service a four-horse, six-passenger coach to convey visitors to McKinney’s Retreat. It took coach travelers 2.5 hours to cover the nine miles between Rubicon Springs and McKinney’s Retreat.

In 1888, General William Phipps sold his Sugar Pine Point homestead to W.W. “Billy” Lapham, who opened the Bellevue Resort. Rooms cost $2.50 per night. Five years after opening the resort, a fire destroyed the Bellevue. In 1897, Isaias W. Hellman, a San Francisco financier, purchased the Bellevue property and, in 1901, built a large mansion for use as a summer retreat.

In 1901, Vade Clark sold Rubicon Springs to Daniel Abbott, who replaced the welcoming signs with “Enter At Your Own Peril.” For the next four years, Vade continued to operate the Springs under a lease from Abbot.

In 1909, Ralph Colwell purchased the Rubicon Springs Resort, adding this health resort to his Moana Villa resort facilities. The Moana Villa was built in 1894 on Lake Tahoe, adjacent to McKinney’s Retreat. The Moana resort comprised a 2 .5 story lodge, cottages, tents, a clubhouse over the water, a 500-foot pier for steamer landings, and a bathing house. Colwell and his three sons ran both the Rubicon Springs and Moana Villa resorts.

The 1920s saw the beginnings of development on the western shores of Lake Tahoe. The Rubicon Springs road was being promoted as the best route from Georgetown to Lake Tahoe. To encourage travel along the route, a promotional automobile trip was organized, compete with photographs in the local papers. The write-up included mention of a survey party that would make plans for improving the road.

Between 1922 and 1926, Rubicon Springs began losing its appeal as a resort and was closed in the latter part of the 1920s. Although the Rubicon Springs Hotel stopped operation in the late 1920s, the structure and several outbuildings were still standing into the 1950s. The Wentworth Springs lodge/hotel, located on the original road and near the start of the off-road section, operated until the early 1960s.

History of the Rubicon Trail

In 1887, the El Dorado County Board of Supervisors declared the trail (or highway) from Wentworth Springs through Hunsucker Springs (Rubicon Springs) a public highway. To ensure that the trail remained open for public use, in 1991, the Board of Supervisors reconfirmed the Rubicon Trail’s status as an unmaintained County right-of-way.

From the 1880s into 1940s, the Rubicon Trail was used to move cattle, sheep, and turkeys from the western slopes of the Sierras to the Meeks Bay area for summer grazing. It was also used to provide access to the resorts located at Wentworth Springs, Rubicon Springs, and the west shores of Lake Tahoe. Later residents of California used the area for hunting and fishing, just as the Maidu had hundreds of years before. Shortly after the Eldorado National Forest was established, the U.S. Forest Service prepared a map showing areas where various game and fish species could be found.

In the 1920s, cars (Dodges and Stars) could travel the route from Georgetown to Rubicon Springs if they used “ropes and planks” to cross some of the rougher spots. Car skeletons found along the trail in the early days were said to be proof of the trail’s difficulty.

El Dorado County officials eventually decided to develop the Rubicon Trail as an improved route from Georgetown to Lake Tahoe. They rebuilt the wooden bridge across the Rubicon River in 1939. In 1947, the County ordered the construction of a steel bridge over the River to replace the log bridge. The steel bridge was constructed in Placerville and transported to the site. To ensure that the various pieces of the bridge would not shift on the trip to the bridge site, they were welded to the frame of the truck. The bridge components were moved into the area via Lake Tahoe and Rubicon Springs. 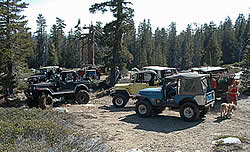 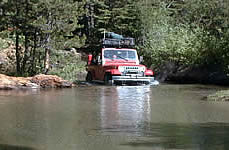 In 1952, several residents of Georgetown met to discuss the possibility of hosting an organized Jeep tour from Georgetown to Lake Tahoe via the Rubicon Trail. On August 29, 1953, 55 Jeeps with 155 participants left Georgetown on a two-day trip that is now known as “Jeepers Jamboree 1.” Every year during the last weekend of July, 4-wheelers follow the tradition of these “pioneers.”