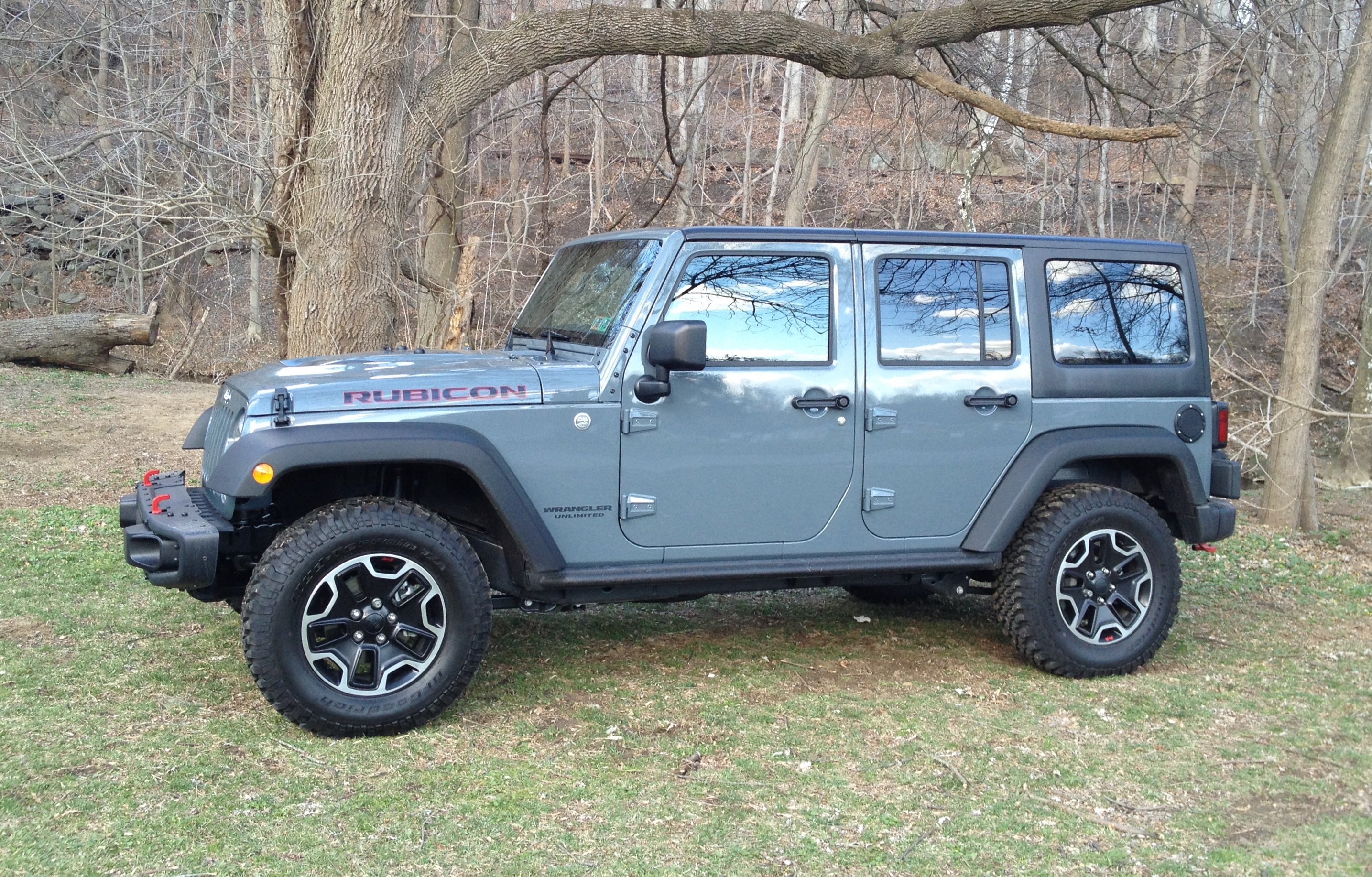 There’s no denying that the Jeep Rubicon is one of the most capable production vehicles ever to roll off the assembly line.  Powered by the 285-horsepower producing Pentastar V6, the Rubicon is equipped with an impressive list of offroad engineering including: the Rock-Trac® transfer case with a 4:1 low gear ratio, brake controlled traction (brake lock differentials), electronic locking differentials front and rear (Tru-Lok®), heavy-duty solid axle Dana 44’s front and rear, standard 4.10 axle gear ratios allowing larger tire sizes and an electronic push button front sway bar disconnect. Add to that Hill Descent Control and Hill Start Assist and you have one of the most capable turnkey 4 wheel drives on the planet. So when Offroaders.com decided to build another project vehicle, it was a no-brainer that the Rubicon would be the base for our build.

Before we even had a Rubicon in our possession, we had come up with a wish list of modifications with the goal of making a Rubicon what we really wanted. After doing some math it didn’t take too long to realized that the Rubicon X was really the best place to start for several reasons.  Just to note that the Rubicon X was the current Rubicon Model when we were looking, which was outfitted the same as the previous year 10th Anniversary and the current Hard Rock Rubicon models.  The 10th Anniversary, Rubicon X and the Rubicon Hard Rock all had some great Mopar additions over the standard Rubicon.  Things that we really thought we would want to buy anyway like winch capable and very stylish steel bumpers, an awesome Mopar dual intake dome hood, heated leather-trimmed seats, and several other enhancements over a standard Rubicon.  We added up the cost of several of these X items and figured it made sense to make a start with the Rubicon X Unlimited rather than add these big price tag items later on.  We really liked the Mopar bumpers and the Mopar raised dome intake hood and these item alone would have cost us about what the Rubicon X model cost over the standard Rubicon.  So armed with a membership to Tread Lightly guaranteeing us a price 1% below factory invoice we brought home a brand new 2014 Rubicon X in stunning Anvil and highlighted with red accents.  Shortly after, the projects started.

Our goal was to enhance the very capable Rubicon even more so but without getting too outrageous or compromising the factory geometry.  Like just about every family owned Jeep Wrangler out there most of the driving will be on the road, hauling our families, commuting to and from work, getting the groceries. We’ll see the occasional weekend event on the trails but primary goal was to take our factory Rubicon X and make it better.  We love the look of the Rubicon X.  Sophisticated, capable, sharp and stylish right down to the factory black wheels and we wanted to preserve the look our Anvil X nevertheless modify it into something bigger and better. 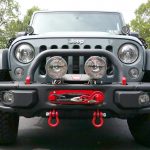 Maximus-3 (www.Maximus-3.com) steps up the form and functionality of the Mopar designed Rubicon X front bumper. Even before we had our Rubicon X, we were looking at the products from Maximus-3.  Knowing these high quality and beautifully engineered products were available for an X Package (as well as the 10th Anniversary and Hard Rock Limited Addition packages) was a factor in the decision to buy the X over a standard Rubicon.

In this article we discuss, install and review the Maximus-3 Winch Mount and Vacuum Pump Relocation Bracket, the Classic Hoop package, the Winch Hook Anchor in a centered configuration, a set of Maximus-3 Light Brackets, and a pair of D-Ring Loops.  We then finish off the Maximus-3 enhancements with our trusted, reliable Warn 9500i winch and a set of Lightforce RMDL170 ‘STRIKER’ 170mm diameter lights converted to burn with 23,000 volts of H.I.D. illumination. 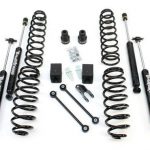 Project X was getting a lift but nothing radical.  We wanted to adequately clear 35″ mud tires while maintaining decent road handling and the lowest possible center of gravity without major chopping or fender modifications.  After lots of research and talking to people we decided on the TeraFlex 2.5″ lift kit.  This well balanced, progressive rate spring set gives us 3″ of lift up front and 2″ lift out back.  Enough to clear 35’s at full flex. (article coming soon…) 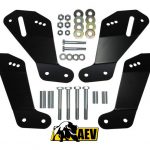 We added a set of AEV Geometry Correction Front Control Arm Brackets to level out the lower control arms and it made a noticeable difference in the handling and improved braking performance. (article coming soon…) 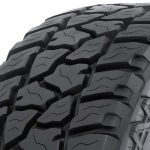 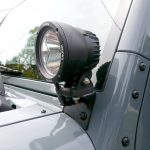 We installed a set of Vision-X LED Lights. Fabricated from hybrid aluminum poly carbonate and equipped with high output LED technology, these lights are super strong and super bright! 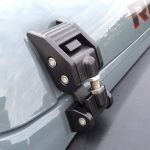 There’s something discerning about cruising down the freeway, looking out at your Jeep hood and seeing “hood flutter”. The stock Jeep hood latches are made of rubber and as air is forced into the engine bay through the grill it causes the hood to lift slightly but noticeably. That’s called hood flutter. You might have even read about these stock hood latches snapping and the hood slamming up into the windshield. Not good a scenario at 70 mph. In this article we installed a set of Rugged Ridge Black Aluminum Hood Catches that not just hold the hood down firmly but look fantastic! 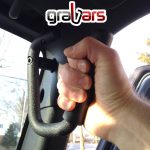 While it’s nice of Jeep to include a set of grab handles for easy entry into the Jeep, we find the location of the grab handles to be somewhat awkward. A MUCH better place to put a grab handle is right up in the top corner of the windshield. That’s where the GrabBars Grab Handles install for a very ergonomic place to leverage yourself up into the Jeep. In this article we install a set of heavy duty GrabBars Grab Handles.

This section categorizes many popular Winches, Winch Accessories and other 4×4, offroad and performance related vendors. Browse the links below to find Winches and Winch Accessories related retailers.  If you have a favorite vendor you think […]