Intended Usage of You Winch

Winches can vary greatly. Some are designed for light duty, occasional use while others are designed for frequent, heavy use. When choosing a winch, look at how your winch will be used. It’s better to spend a little more if you will use your winch frequently.

Recommended winch capacity over vehicle weight. A rule of thumb is to choose a winch with enough power for your vehicle. Typical use should be calculated with this easy formula: gross vehicle weight x 1.5 = minimum winch size.

The torque applied to the winch input shaft required to start a rated load upward from a suspended position. It is expressed in pound-feet, pound-inches, kilogram-meters or Newton-meters. May be referred to as static torque.

The torque applied to the winch input shaft required to maintain upward movement of rated load. It is expressed in pound-feet, pound-inches, kilogram-meters or Newton-meters. May also be referred to as dynamic torque.

The maximum permissible input speed at rated load expressed in RPM. Exceeding rated input speed may cause damage to the worm gear set.

A drum containing the maximum number of cable layers which would leave a freeboard of 0.7 x the cable diameter below the drum flange.

The maximum length of a specific diameter cable or wire rope which may be wound on a cable drum without exceeding the maximum number of layers. It is expressed in feet or meters.

This is the rated line pulling capacity that a single line can handle safely without the use of a snatch block or other device. This is measured on level ground pulling dead weight (not rolling weight) from the first layer of cable on the drum. The line pull on any layer that results from the output torque which produces maximum rated line pull on the first layer. Rated first layer line pull is based on maintaining an acceptable structural safety factor while providing an acceptable component service life. Line pull is expressed in pounds or kilograms.

The line speed on any specific layer that results from rated input speed. It is expressed in feet/minute or meters/minute.

This the length of line that a winch can spool off and on it’s drum in one minute. Faster line speeds provide quicker winch pulls and are generally found in more expensive winches.

The result of a test, expressed as the distance (feet or meters) a load travels up and down while hoisting and lowering a specified weight until the lubricating oil rises from 100°F to 250°F (38°C to 121°C). 250°F (121°C) is the maximum intermittent gear oil temperature allowed. Most gear oils “break down” rapidly at higher temperatures and seals may be damaged.

Amperage Draw and the Battery

With the addition of a winch, the demand on your electrical system can exceed the system’s capabilities itself. Consider upgrading your alternator to a high output alternator and be sure your car battery is up to the demand of winching. For more info on Battery Tech, See this.

Electric winches rely on the battery for power and not the alternator. An automotive battery is designed to supply a large draw of amps from the battery in a short period of time, such as when you start your engine. Alternators typically supply under 100 amps. A winch during the pull may demand 400 or more amps from your electric system. It is the job of the battery to supply the the power. Therefore it is important that your battery is capable of supplying the required power. Manufacturers of winches typically recommend a Battery that can supply 650 CCA (Cold Cranking Amps) minimum for winching. Battery Leads to the winch should be at least 2 gauge and shorter than 72″ (1.83m).

Note: If you have an Optima battery or any battery with side terminals (flush on the side and used with a small bolt or connection), it’s recommended that a winch is NOT connected to these smaller terminals. In most cases they can not handle the full amperage draw of a winch. Use of these small terminals can damage your battery and potentially cause a fire. 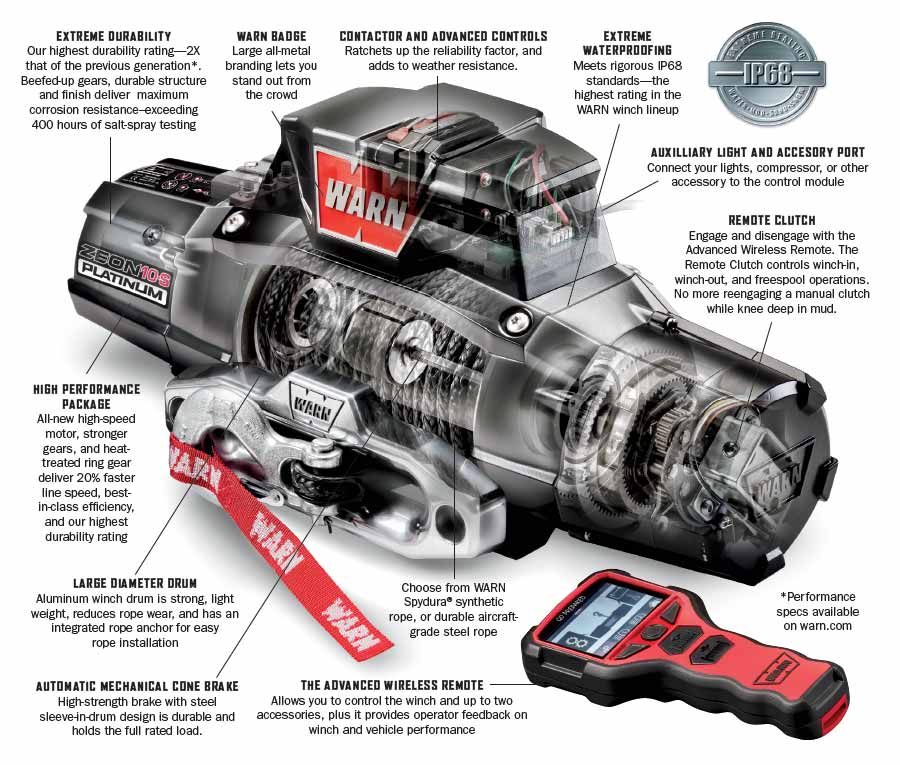 Should be no larger than 1/8th the cable drum barrel diameter for most recovery applications.

Also known as a “dog-clutch” or “jaw clutch”, consists of two or more drive lugs which engage similar driven lugs to transmit torque to the cable drum.

The operation of manually unspooling wire rope from the cable drum by pulling on the free end of the rope while the cable drum is disconnected (declutched) from its power train.

A single coil of wire rope wound on a drum.

All wraps on the same level between drum flanges.

The amount of drum flange that extends past the last layer of wire rope.

A theoretical point located midway between the first layer of wire rope on the cable drum barrel and the top layer. Often used as a reference point in measuring winch performance.

The standard cable drum shaft is extended or replaced by an extra long shaft which permits the use of capstans or CR reels at the side of the vehicle. Usually installed on the curb side of the vehicle, most extension shafts are limited to a standard length of 44 to 46-1/2 in. (112-118 cm) from the cable drum center-line.

Usually a small removable drum used to apply force to fiber rope wrapped around the barrel with tension applied by hand. Most have a nominal barrel diameter of 7 in. (178 mm).

Collapsible recovery reels are used for picking up and coiling power and telephone lines which have been removed from the poles and lowered to the ground. Most CR reels have a nominal barrel diameter of 20 in. (508 mm).

Bronze alloy gear powered by the steel worm. Braden refers to the “bull gear” as the worm gear.

That angle between the wire rope’s position at the extreme end wrap on a drum, and a line drawn perpendicular to the axis of the drum through the center of the nearest fixed sheave or load attachment point.