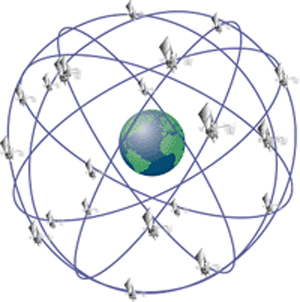 GPS coordinates are commonly displayed as latitude and longitude. This is not a projection to a Cartesian coordinate system (x, y grid) such as state plane or UTM, but an angular coordinate system. Degrees of latitude and longitude measure the angle between a location and the reference line, namely the equator and Greenwich England. The equator is a fairly obvious reference line as it creates a plane bisecting the globe half way between the North Pole and the South Pole. It is relatively easy to locate since a person standing at the equator casts no shadow twice a year (vernal and autumnal equinox. About March 21 and September 21). Latitude is the angle formed by a line from the center of the earth to the equator and a line from the center of the earth to your location. Latitude is zero at the equator, North (positive) 90 degrees at the North Pole, and South (negative) 90 degrees at the South Pole.

Longitude has a much more complicated history as it is far more difficult to determine without GPS. Longitude is the angle formed by a line from the center of the earth to the prime meridian at Greenwich England and a line from the center of the earth to your location. (A meridian is a line of longitude running from pole to pole.) Since the earth rotates 360 degrees each day, it is necessary to know the time very accurately in order to relate the location of the sun to this angle. The English were very involved in shipping and development of an accurate, seagoing clock so that they could accurately calculate the correct longitude. They chose to use the Royal Observatory at Greenwich, London, England for their reference meridian. (Visit http://millennium-dome.com/info/conference.htm for more information) Longitude ranges from West (negative) 180 degrees to East (positive) 180 degrees.

Latitude and Longitude are frequently recorded as degrees, minutes and seconds. Ptolemy (about 150 AD) divided the degrees into 60 parts and those parts into 60 parts. “In the Latin translation of the text these subdivisions became partes minutae primae and partes minutae secundae from whence our “minutes” and “seconds” of arc are derived.” (Brown, The Story of Maps, pg 60) This can be cumbersome so you could use Decimal Degrees. GIS systems need to use this simpler format. This table below shows the precision of various units at the northern U.S. region. Note that one degree of longitude is about 69 miles at the equator and 0 miles at the poles. Latitude is always about 69 miles.

W If it is negative then it is either west longitude or south latitude.

118 The degrees are left of the decimal place

State Plane and Universal Transverse Mercator (UTM) coordinate systems are commonly used in the GIS/GPS industry. State plane coordinates are not usually used on personal GPS units as there are many separate State Plane coordinates systems and they vary enough that they can be difficult to explain. UTM is commonly found on USGS Topographic maps so can be useful for outdoorsmen who are using these maps. The units are meters from a reference point. We are in UTM Zone 11 North. Each zone covers 6 degrees of longitude. Its origin is at the equator and its central meridian (Zone 11’s central meridian is 117 degrees W). A false easting of 500,000 is used to make sure that all of the coordinates are positive. Units will be X meters East and Y meters North. (Note that there are 3.2808 feet/meter)

The two most common datums in use today are WGS 84 (World Geodetic System of 1984. A geocentric datum and geographic coordinate system created by the United States military) and NAD83 (North American Datum of 1983. A geocentric datum and graphic coordinate system based on the Geodetic Reference System 1980 ellipsoid (GRS80). Mainly used in North America, its measurements are obtained from both terrestrial and satellite data.) A less common datum is NAD27. (North American Datum of 1927. The primary local geodetic datum and geographic coordinate system used to map the United States during the middle part of the 20th century, referenced to the Clarke spheroid of 1866 and an initial point at Meades Ranch, Kansas. Features on USGS topographic maps, including the corners of 7.5-minute quadrangle maps, are referenced to NAD27. It is gradually being replaced by the North American Datum of 1983.)

Magnetic Declination relates magnetic north (where a needle points) to true north (north pole). You can go to the NOAA website to calculate the current declination for you area. http://www.ngdc.noaa.gov/  Declination Declination does change over time and varies by location.

Some GPS units have a digital compass built in (expensive) and others use calculated bearing from GPS coordinates collected along your path (course you have been following, not necessarily where you are going, and NOT where the unit is pointing). Using the compass on a GPS unit is often difficult to do well and thus ill advised. A high quality option that is fairly easy to use (instructions included) is the Silva Ranger CLQ Sighting Compass with Quadrants Bezel. This compass has a mirror and sighting notch to aid accurate sighting. The quadrant bezel reads in units like you normally find on legal descriptions and in 2 degree increments for fine resolution. There is also a geared adjustment of declination so that declination compensation becomes automatic and stable. Price is around $60.

WAAS is a system for correcting GPS coordinates so that their accuracy is adequate for precision flight operations at airports. The FAA is helping to develop this system and is now available on many GPS units that you buy over the counter. Visit the FAA’s website to read more about it. http://gps.faa.gov/Programs/WAAS/waas.htm This is a relatively inexpensive feature that is highly recommended.