Using a Hard Drive Magnet on your Oil Filter 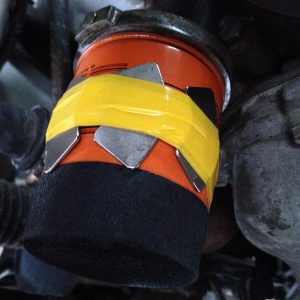 It’s a fact that as your engine runs, tiny metallic particles along with the soot from the combustion process become suspended in your circulating oil.  That’s the nature of an engine where metal on metal contact occurs. The engine oil attempts to create a lubricating buffer between the metal parts to reduce friction, thus extending the life of the engine.  Your oil filter’s mesh membrane does its part in capturing particles down to about 10 microns, but what about particles less than 10 microns in size?  What about the worst kind of particles, the tiny metallic pieces of steel that used to be part of your ending’s moving parts?  If they are small enough, they continue to float around in the oil and passing through your oil filter creating further wear as that fine film of oil separating the moving parts carries not only the fine abrasive soot that turns your oil black but also fine metal particles.

If you’ve ever seen a magnetic oil drain plug, especially those that come off of a differential plug or a manual transmission drain plug, you may have seen the fine particles stuck to the magnet.  While these may be extreme examples since the metal to metal components are under a high degree of stress and the oil is not filtered, it does show the effectiveness of a magnet to capture metal particles suspended in oil.  So from there, you might be able to see how a magnet can capture tiny steel particles floating in your oil.  Probably one of the most effective places to put a magnet would be at the lowest point in the engine, the drain plug.  An OEM replacement magnetic drain can be purchased online from a number of manufacturers.  Don’t attempt to modify a stock non-magnetic drain plug by attaching a magnet to it.  The last thing you want is a magnet breaking free and coming in contact with the moving parts in the lower end of your engine.

But a magnetic oil drain plug is not the point of this article.  Here we want to explore the idea of using one of the most commonly acquired SUPER strong magnets you can find and attach it to the housing of a steel oil filter.  Why the oil filter?  Because you are going to capture steel particles on the inside of the housing, then at your oil change, you are going to discard the filter (in an EPA approved method of course). 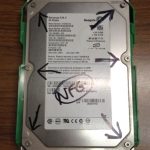 Next, we are going to have fun and dissect the hard drive.  No need to be gentle if you don’t have the right driver set, but it does make the job easier if you can open the drive without much effort.  Don’t try smashing it on the ground.  That won’t work. Hard drives are quite durable.  To remove the magnets, you will remove an aluminum plate by removing typically seven T6 Torx screws.

Now that we have the magnets, the next step is to simply attach them to your oil filter!

When you extract magnets from hard drives, sometimes they are quite large, others are smaller.  ALL are very Strong!  However they are fragile with nickel plating and will break easily so use care when removing them from the plates.  Keep them away from your credit cards or other digital media.  The strong field will damage magnetic strips or other digital media.

Does this REALLY do anything??

Yes!  The more magnets on the filter the better!  I have seen used filters that had magnets attached to them for the duration of that batch of oil and when they were opened up, there were ferrous metal particles attached to the wall of the filter.  The magnets did their job and removed these particles from the oil flow.  Now the argument is out there that the filter media would have trapped the ferrous particles.  BUT I argue that IF these particles were smaller than 10 microns, they will likely pass through the filter and act as an abrasive in your engine!  So remove what you can!  It may not be a huge benefit but it can’t hurt anything, only help.  Remember though, nothing beats regular oil changes with quality synthetic oil.   Happy Trails.

There you have it, another tip from the Hard Drive Magnet Guy.  For more Cheap Tricks and Useful Tips:

Mud Tires – MUD TIRES or MT are as you might have gathered from the name, designed to perform most specifically in the mud. But when you look at the tread design of many mud […]