If you’re like most 4×4 owners, you’re never satisfied with your vehicle as is. Chances are you probably don’t mind getting a little greasy on the weekend making modifications to your rig. But by the time it’s Miller time you now have a pair of pants and a shirt that are sometimes so thick with grease and grime that they can stand on their own in the corner…until next weekend.

Weekend garage warriors usually have a set of clothes that are only worn on those specific occasions when we have to get greasy because, well, those black jeans that were once blue denim are now permanently black. At least they were until I tried using a product on them that most of us have and use frequently. GoJo hand cleaner. This is that stuff that is a “gell like” goo that wiggles like Gello and cuts the grease like mad. (some stores carry a similar grease cutter under a different name). 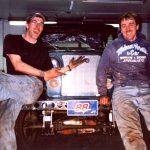 I thought that if they cut through the grease on my hands, why not try it on the jeans? After helping a good friend put a Black Diamond suspension lift on his Jeep, I took the quite greasy jeans and rubbed GoJo into the greasy spots on the jeans (which was mostly everywhere). Then I took a small scoop of the GoJo and threw it into the washer along with some laundry soap. Might I suggest using the machines at a Laundromat instead of the home washer to avoid contaminating future wash loads with residual grease. If you do use your own wash machine don’t let the wife see you put those jeans in “her” washer. I used my own while the wife was out at the store. I didn’t put anything else in the washer except the shirt I wore which was just about as greasy. I ran it on about a medium load setting with hot water. Afterwards I was surprised to see most of the grease was gone. The only thing left wash paint and tin roof coating from previous jobs. Of course you won’t have that spring fresh smell, more like a petroleum aroma which is cool with me. I don’t know if I’d recommend running the white wash afterwards. If you used your own machine you might want to do another load of wash with some of your not so new items just to be sure you got the grease out of the washer.

Other great products that cuts the grease and under the vehicle road grim is Super Clean by Castrol and Simple Green. They’re great for transforming your suspension from greasy grim to looking like new by using this stuff, washing it off and painting your suspension with a couple of cans of Black Rustoleum.