Sustainability issues are at the forefront of the automotive industry and everyone seems to be looking for viable green and clean alternatives to internal combustion engines. With gas prices soaring there’s a focus on fuel efficiency and the next generation of clean vehicles is paving the way for various types of electric vehicles.

In the off-road realm, GOAL ZERO began seven years ago with a mission to be the leader in producing innovative and dependable products that empower. “With our products we help people break away from the grid to use the power of the sun which is free, clean, and renewable,” says Lisa Janssen, GOAL ZERO’s Public Relations Coordinator. The company’s main focus is on solar-powered parts and accessories. Power units, solar panels and light sources number among the nearly 50 environmentally-friendly GOAL ZERO products.

But what if roads could be solar?

This sci-fi scenario is beginning to gain traction as a proposed alternative to the Federal Interstate Highway System that President Eisenhower ordered built in the event that residents would had to evacuate because of an atomic attack. Since construction in the mid-1950s those roads have been constantly used and repaved and that’s a lot of asphalt. In fact, there are over 25,000 square miles of asphalt surfaces in the lower 48 states alone.

A solicitation was released by the U.S. Department of Transportation calling for an intelligent pavement that could generate power and pay for itself. Scott Brusaw and his wife Julie of Solar Roadways applied and was awarded a research grant and he put it to good use by constructing a 12 ft. x 12 ft. prototype solar panel. The prototype houses over 6,000 LED lights, giving it the ability to spell out warning messages. With the help of others like Mark Dixon of YERT.com (YourEnvironmentalRoadTrip.com), Brusaw is forging ahead with his vision for the revolutionary roads. 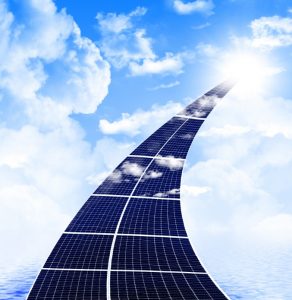 During his 2010 TED Talk, Brusaw outlined his ideas for Solar Roadways. He proposed that solar panels could be encased in tempered glass that would be tested to meet impact requirements. The road would be shatter, water, and fire proof using a glass composite that could be as durable as steel. The panels would pay for themselves by generating energy and one of their selling points is they could be laid down over the asphalt already there.
Brusaw envisions mixing garbage from landfills and the ocean with organic material to construct the internal support structure for the solar panels. Harnessing energy from the sun, the panels would be lit up like airport runways with microprocessors inside, meaning they could communicate with each other. Sensors in microprocessors could warn drivers about objects or animals on the road before their vehicles reach them. Another advantage is an electric road could recharge an electric car.

Recently, Solar Roadways raised over $1.8 million during its crowd funding mission on IndieGoGo, but the proposition is not without its opponents. Electrical engineer David Forbes has cited technical hurdles and financial ones. Materials, installation, and maintenance costs of solar panels with LEDs are far more complicated than paving with asphalt. Forbes notes that with complex computer microprocessors it would be a tall order to keep the system up and running and it would be vulnerable to hacking. He also questions the durability of the glass plates with constant pressure on them.

Eventually, the plan is for the solar panels to supplant sidewalks and bike lanes as well. If solar roadways are too much technology for you, don’t worry. Taking your 4×4 off-road on trails, over rocks, and through streams is always an option.

David Beran is a Copywriter at 4 Wheel Parts

The following are some general offroad driving techniques that are used in all types of terrain. These general tips can help to improve your ability to navigate safely and efficiently.Safety & Hand PositionWhen driving off […]